Domů Blogy Gigathlon Jablonec 2015
Facebook
Twitter
Pinterest
WhatsApp
In July, I had the great opportunity to participate in Gigathlon race in Switzerland, as covered in previous Gigathlon posts. And as we prepare to the first ever Gigathlon outside of Switzerland at Lipno in September 2016, a mini Gigathlon tour takes place in different locations of the Czech Republic this year. That brought me to Jablonec. And as all my potential team mates were somewhere on vacation abroad, I decided to sign up for the whole thing given the fact the distances are sort of „sprint“: 500 m swim – 2.3 km run – 5 km inline skating – 10 km mountain bike – 2.3 km run.
We went for a test ride through the mountain bike loop – the race was two times 5 km loop. I was glad I did it even though I thought of switching to couples for a moment. I am just really afraid of downhills on the MTB, I am not used to it, we had made a switch for the two weekend with Kačka so she has the pleasure to ride my beautiful road bike 🙂 Thank you for the bike!
Swim
Since I somehow did not put in too much swim training sessions I realised I will go with the breast stroke as it tires me less and is probably faster for me. I came out of water among the last ones, but not with huge gap (not counting the top leaders :D). It was interesting experience as I never swam in a race before. On the other hand, I did not want to feel exhausted having 3 more disciplines to go … Well I should definitely work on swimming more. It might be real fun to be able to swim little faster and do short triathlon from time to time 🙁
Run 1
First run was pretty challenging, not long, but mostly uphill. You know what? I was afraid of falling on the mountain bike and I fell running uphill??? I wanted to shift gears from power walk on steep uphill to running and I slipped on the trail and fell 😀 Nothing serious just dirty leg and butt 🙂
Inline skating
Inline skating was done on a part of training loop for cross country skiers so it was nothing flat, but not too dangerous, though some people were afraid of going fast on downhills. I really liked it. 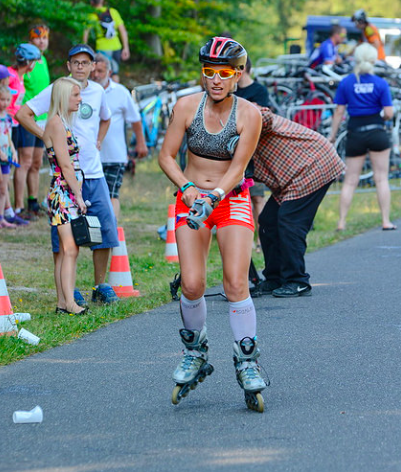 Bike
For me trouble on the bike are the downhills, the guys I overtook on the run and/or inline skates flew by me on the downhills. There were two 5 km loops, in the first one I stepped off the bike for two downhills, in the second rounds I only did that once. I like my legs too much and I do not want to ruin my running by falling on bike in fun event…
Run 2
And finally there was the run back down. I was happy to be able to get some leg turnover even though it felt really strange after the inline skates and bike, but still I am runner, so running feels the most natural 🙂 By this time we were quite on our own, I wanted to overtake at least one guy ahead of me and I did, so I was really happy. Little sorry that I did not manage to overtake one more. But I was pretty much maxed out as I realised after the finish… It took me quite long to put myself back together. I somehow did not realise, that it got really hot until the 11:35 am when I finished. Overall time 1:35:21 including transitions. Finished 36th overall, 3rd female 🙂
Here is the full Garmin activity: https://connect.garmin.com/modern/activity/858521684 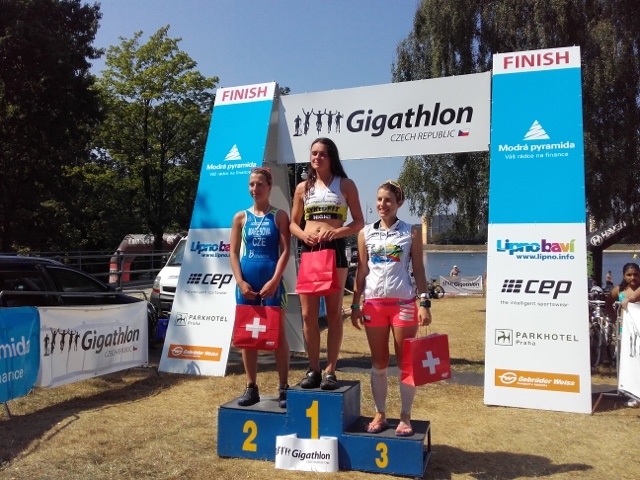 Happy finishing 3rd even tough the girls ahead were pretty far from my reach.
Need to work on swimming! 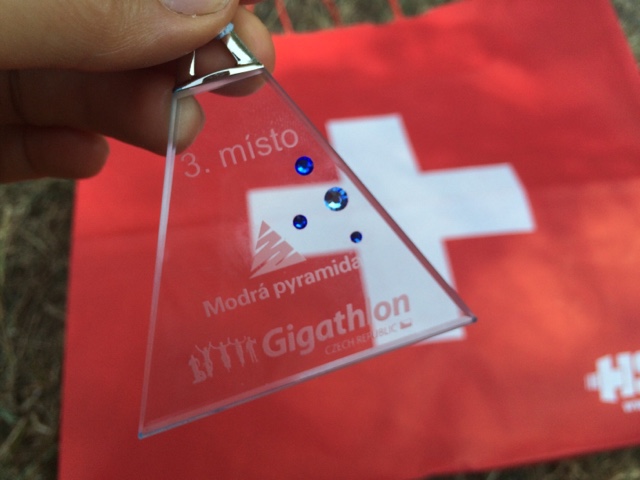 Beautiful local made trophy!
Interested in trying Gigathlon? You can do another mini race in Plzeň on August 29th – check out the official Gigathlon website for more information on Plzeň and on the big race next year at Lipno! Also follow Gigathlon Czech Republic on Facebook. 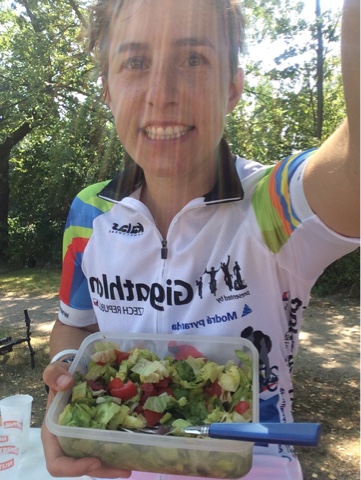 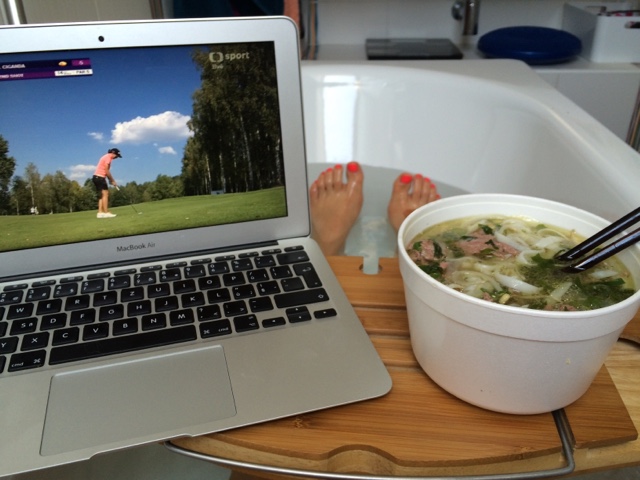 And perfect recovery treat back home – ice bath while watching Ladies European Tour and eating Vietnamese Pho beef broth … great way to refill on minerals and carbs (rice noodles).
And that was it for me, totally dead afterwards but happy to have done the singles option 🙂